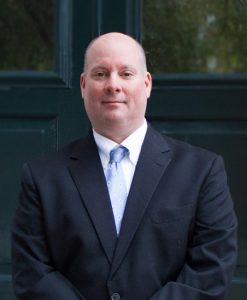 Attorney Jeffrey D. Null is a military brat and was born in Tampa, Florida.  His family moved to the Fort Bragg area when he was three.  Jeff’s mother was a Cumberland County Teacher’s Assistant at Manchester Elementary and his father is now retired Air Force.  Jeff grew up in Spring Lake, North Carolina and attended Cumberland County public schools.  He graduated from Pine Forest High School in 1987 where he played Varsity Football for three years.

Upon graduation, Jeff went into private practice in Asheville, NC handling personal injury cases.  He then decided to return to his home town to be closer to family and practiced at Hutchens & Senter doing civil litigation, criminal defense and traffic.  Jeff had the opportunity to work in the Cumberland County District Attorney’s office for the former District Attorney Ed Grannis who became his mentor and friend.  Jeff prosecuted cases in District Court and Superior Court from DUIs to a death penalty jury trial.  His experience there was invaluable.

After his tenure at the DA’s office, Jeff returned to private practice at Rand & Gregory, P.A. where he practiced in the areas of Criminal Defense, Traffic and Bankruptcy.  He practiced law there with his wife and law partner, Laura Devan for over ten years.  In 2012 Jeff decided to branch out and form his own law firm, The Law Offices of Jeffrey D. Null, PLLC which he is now merging with his wife to form Devan & Null, PLLC.

In his 27 years of practice, Jeff has handled thousands of cases as a prosecutor and defense attorney.  He understands criminal cases from both sides – prosecution and defense.  He represents kids in Juvenile Delinquency Court and adults in District and Superior court.  Jeff also represents individuals charged in Federal Court.  Jeff has tried numerous jury trials both as a prosecutor and as a defense attorney.  He has prosecuted and defended death penalty cases.

While practicing law, Jeff has been active in our community.  He has served as a coach for the Wade Edwards Mock trial program.  Jeff also helps Laura with her non-profit work and has volunteered and assisted at many events including Better Health’s Red Apple Run for Diabetes.