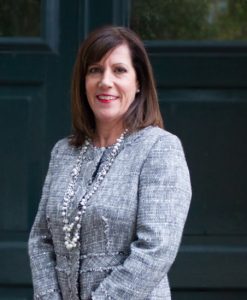 Retired Judge Laura A. Devan attended Lafayette College in Pennsylvania where she was inducted into Phi Beta Kappa and graduated with honors with a BA in History and French. She received her law degree from the University of North Carolina at Chapel Hill School of Law. While in law school, Judge Devan volunteered with the Orange-Durham Coalition for Battered Women and the UNC Law Domestic Violence Project.

Her long term goal of doing poverty-impact work was realized with her first job at East Central Community Legal Services where she worked in the areas of housing and education law. Judge Devan moved to Fayetteville in 1995 where she went into private practice specializing in the area of Family Law and continued her nonprofit work. She has served on the Dogwood Festival Committee, the Cape Fear Regional Theater Board, in the Junior League of Fayetteville, and was a founding member of the Women’s Giving Circle. She currently serves on the boards of Better Health of Cumberland County, the Child Advocacy Center, and Fayetteville Animal Protection Society. Laura previously served as a Commissioner on the State Rules Review Commission, on the State Criminal Justice Partnership Board and on the Local Domestic Relations Steering Committee for Family Court.

In 2008, Laura was appointed by Governor Easley to a newly created 10th District Court Judgeship in Cumberland County. She won a contested election in 2008 and ran unopposed in 2012. Laura served as one of the five Family Court Judges and sat primarily in Family Court, Domestic Violence Court and Child Support Enforcement Court.  In 2016 she decided not to seek re-election but to return to advocacy and private practice. In her free time, Laura enjoys her volunteer work, and is an avid runner who loves competing in races.